What’s in Your First Aid Kit? 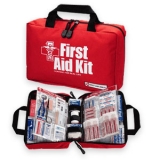 We have heard many times the importance of having a First Aid Kit on our bikes. We often will be asked during a pre-ride meeting for those who do have them to raise their hands. The Top Cats have made great progress over the years raising the level of importance of carrying these kits and of course we have held First Aid and CPR courses every other year or more often.
One Web site that has a significant amount of information on this Topic is www.firstaidanywhere.com
They point out that the most common injuries for motorcycle riders are:
Burns, both major (from exhaust pipes) and minor (sunburn)
Eye Injuries (things blowing in our eyes).
Cuts, scrapes, road rash and fractures.
Then we have things such as bee stings or other allergic reactions.
These are many of the same things we learned in our first aid classes. It never hurts to be reminded often about what we may face.
Back around 2007 the Top Cats had a safety kit campaign. Over 30 kits were assembled and sold to our membership. Based on ideas similar to what the web site offers up, many items were purchased in bulk to make the kits.
One of the tips we receive often, but in many cases ignore, is to replace items in your First Aid kit each year. So of course that brings us to a real life, Top Cats Story!
This past season, I had the opportunity to need some first aid on one of our rides. While riding some great country roads near Galena, a large bumblebee ended up under my sleeve and on my shoulder. It proceeded to sting me multiple times. Due to some past issues, I was concernedabout a possible reaction.

Our Road Captain pulled us over. It was my intention to take some Benadryl as a precautionary measure. Tony Loden did have an epi pen, which would have been handy if a reaction took place. Greg Smith looked in his first aid kit and pulled out some Benadryl. The only issue was it had expired 5 years ago. With no stores in sight, the old Benadryl would hopefully do the trick, which turned out to be true. 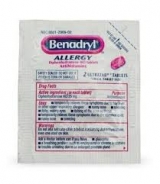 When I got home I pulled out my own first aid kit and discovered that mine had some old expired Benadryl in it as well, along with a whole bunch of other old stuff.
So not only did my kit have old stuff in it, I had no idea it was even in there. The truth is that in my mind the kit was not that old, maybe a year or two. Whenever I heard someone remind us to replace items in our kits, I simply thought good idea, when mine gets old!
Most of the items in out kits do expire. The alcohol wipes dry out, band aids lose adhesive strength and drugs lose their potency.
Let’s make this winter the season that everyone checks their First Aid Kits, replaces the old items, and understands what they have. Don’t have a first aid kit? Perhaps this is the year to get one.