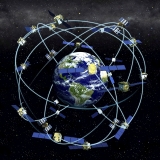 Just think how different history and everyday life would have been if devices like the GPS had existed, even in the past hundred years; just for starters, where Amelia Earhart crashed might never have been a mystery. The ‘60s TV show Gilligan’s Island might never have been produced because it would have been rejected as an unlikely scenario. And perhaps more relevantly: that time your motorcycle broke down in the middle of nowhere and you had no means to communicate your location may never have become the epic – or harrowing – adventure it was.

Originally designed for the US military in the early 1970’s GPS or the Global Positioning System is a satellite navigational system, predominantly designed for navigation. Twenty-four satellites, eight in each of three orbital planes spaced 120-degrees apart, and their ground stations, formed the “man-made stars” as reference points to calculate geographical positions, now accurate to a matter of yards became fully operational to the general public in 1995.

Today GPS receivers have been miniaturized to just a few integrated circuits and have become very economical, finding their way into the aviation, marine, railway, automotive and even cellphone industries. These units work solely by storing all the maps on the device and using the GPS signal to pinpoint your location and then tell you what route and direction to take to reach a specific destination. They have now become the security blanket while travelling thru the skies, crossing the oceans or cruising down the highway! It was only a matter of time before someone strapped a receiving unit onto a motorcycle.

Now most of us are wise enough to know that safety comes first when we are out on our prized possessions. That means helmets, leathers, reflective gear, TCLOCK, the whole nine yards. But this little technological advancement has meant that we riders now need to keep ourselves safe in a totally different way. If you are in a car, that glowing map and the voice of your choosing every now and then barking back at you is pretty cool. Translate all of this into the world of the motorcycle rider, though, and GPS is a potential distraction, and “distracted driving” as the safety experts call it, is a common cause of accidents.

There is one big issue with the entire motorcycle GPS “distracted driving” debate, and that is that a lot of people who proclaim that it is dangerous are not actually riders themselves. One of the key assumptions that proponents of this argument make is that glancing at a GPS screen while cruising down the road is more dangerous than it is in a car. This is based on no research whatsoever, and as such is an unfounded claim to make. If you have ever used a GPS while riding you should know it is almost exactly the same amount of effort (and therefore distraction) as in a car. A quick glance to see what’s coming your way and then eyes back on the road; simple.

So to clear up the whole “distracted driver” safety debate,, before you think about using a GPS unit on your bike, you need to consider where to mount it. Whether your mount is on your handlebars, your faring or a third party mount, the location of the GPS unit should be in a comfortable location to monitor the ever changing information and it should not consume a lot of focus from your visual scanning of the road to glance at occasionally. The location should also be easy to reach with one hand if route adjustments or information is needed. Once mounted, adjust the unit for these conditions and verify the unit is reactive with gloves before you begin to roll as most touch screens need the heat of the finger to activate. The unit should also have a fairly bright screen in the final location so it does not wash out badly in the sun.

Configure the unit before you ride; this means putting in all the standard defaults, such as your “home” location, your time zone, any warning tones such as a signal for exceeding the speed limit, the layout of the information that you want to see on the screen, what voice you want to hear, all the typical things that so with the GPS. If your unit requires internet connectivity, make sure it can operate without advising you that it has lost its connectivity. Some units want to advise you that it has lost it, blanking out the main screen; this is a major distraction and potentially a hazard if you are relying on your turn-by-turn directions to get from point A to point B.

Now that the unit is mounted in a non-distracting location and fully configured, you may want to hear that voice of your choosing bark out those turn-by-turn directions as you cruise down the road with the wind in your face. If so, then a GPS with a phone jack for remote speakers or better yet Bluetooth technology is the answer. This also solves the key issue that doubters have about riders’ taking their eyes off the road to monitor the GPS. By doing this, you can hear those instructions right from the GPS blasted with your music or thru Bluetooth in your ear so you will never actually have to glance at the screen if you do not need to.

Here are some of the reasons why you’re safer with GPS:

And a couple of things to avoid:

Just remember, first you ride and then you navigate as a second priority. It’s a reminder worth repeating to yourself to you to use your GPS in a way that enhances, rather than detracts from a safe ride. Your first and most important job is staying aware of your environment and keeping your bike where it belongs.